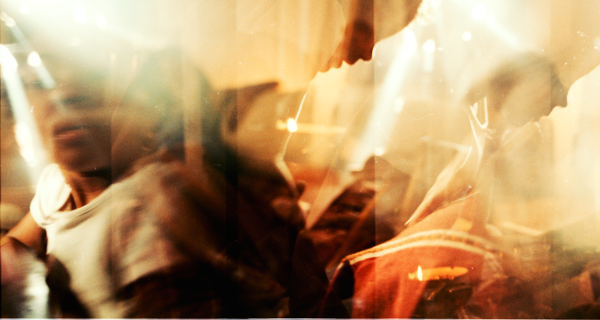 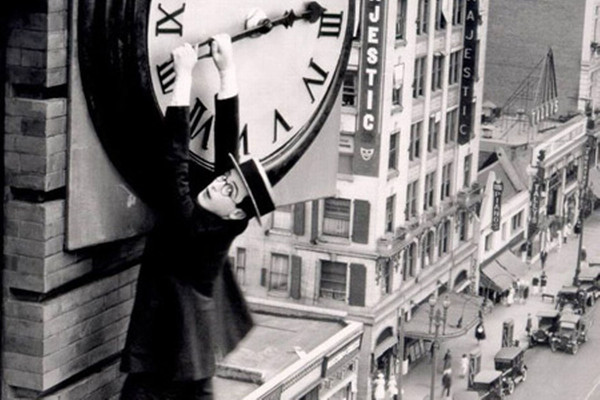 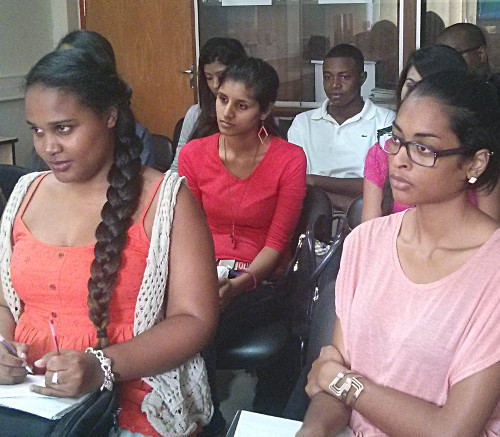 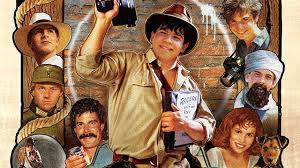 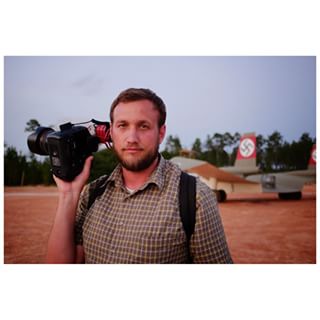 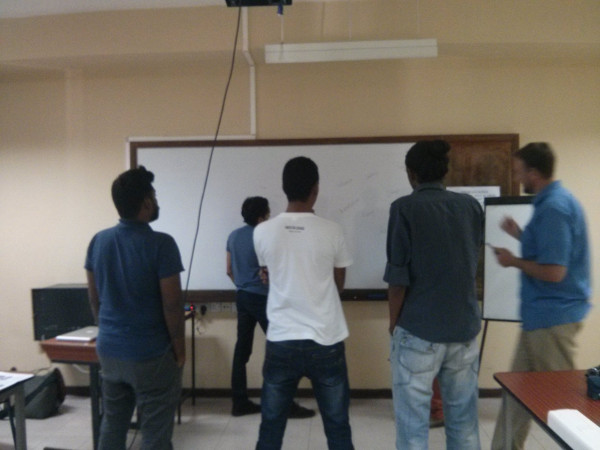 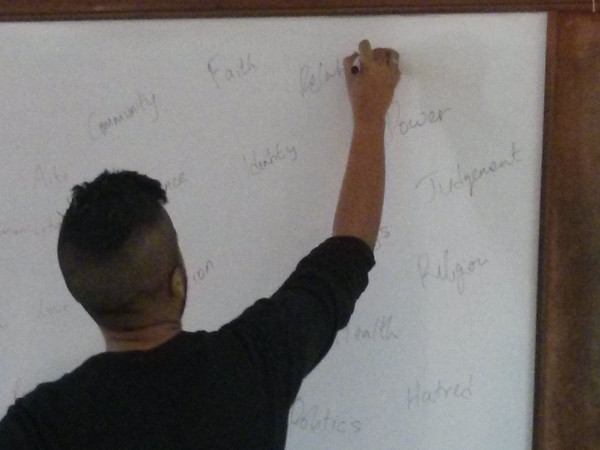 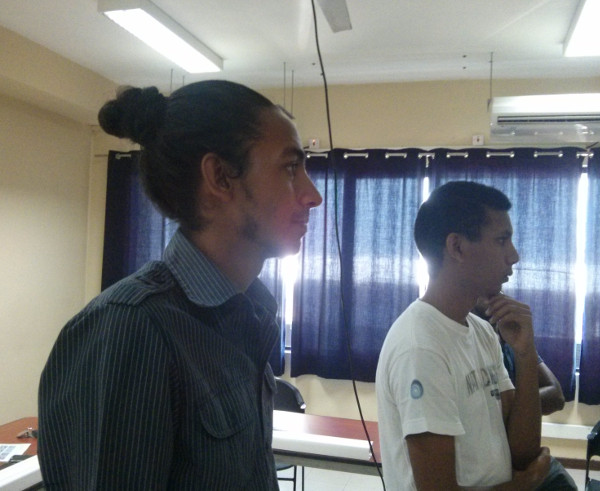 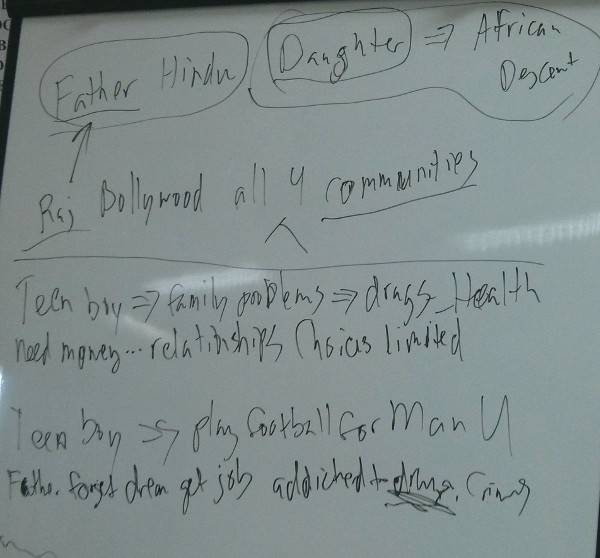 Here are the slides (which I have expanded) used for the presentation on Wednesday 9th April about Ethical Reporting on Gender-Based Violence at the University of Mauritius.

For information, the workshop was organised by the Ministry of Gender and aimed at helping aspiring journalists to understand the issues related to GBV, the work being done to support victims/survivors of GBV and how to report on GBV in an ethical manner.

requests the pleasure of your company at the

on Monday 10th June 2013 at 13 00 hrs at the R. Burrenchobay Lecture Theatre (RBLT), University of Mauritius

Guests are kindly requested to be seated by 12 50 hrs
RSVP: or

Please note that a free copy of the book (including the code) will be subsequently distributed to all journalists and media houses. A registration list will have to be completed on the day of the launching. 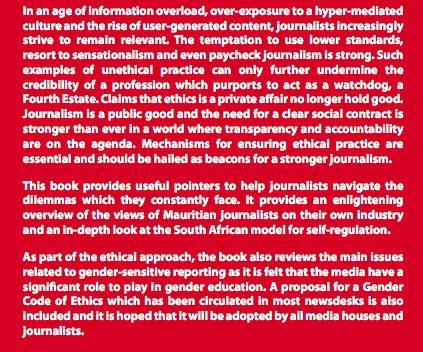 As a follow up to our October 2012 workshop on gender-sensitive reporting which was sponsored by UNESCO, we have been asked to propose a Gender Code of Ethics for the Media. Before finalising, we are seeking views and suggestions on the draft proposal  You can either comment here or send an email to  or . We will soon launch a book as a follow up to the workshop on ethics in journalism and the workshop on gender-sensitive reporting. It will be made available freely to all journalists and media houses and will be an interesting follow-up to Robertson’s preliminary report.
—————————

Proposed Gender Code of Ethics for the Media
Gender equality is an integral part of freedom of expression as all gender categories have the right to be heard and seen in the public sphere as full-fledge citizens participating in a democratic society. Gender balance is thus important in news reporting. Equally important is the need to challenge prevailing gender stereotypes.

Journalists endeavour to recognise the diversity of race, ethnicity, religion, sex, ability, sexuality, age and class. They shall strive to eliminate discrimination on the basis of gender from their respective publication and pledge to put more effort to provide for more balance, fairness and accuracy in their reports. They shall strive to be inclusive by seeking a diversity of voices rather than rely solely on usual male dominant sources.

Journalists and media houses shall NOT:

In the workplace, media houses shall allow journalists to work across a diversity of beats, irrespective of gender category. They shall ensure that selection, recruitment, career pathing, capacity building, training, fast tracking and promotion are devoid of gender discrimination and that there is no tolerance for sexual harassment in the workplace. They shall encourage friendly work practices and mutual respect between men and women. Media houses shall encourage the active pursuit of knowledge in gender issues and incorporate same in their training programmes. They shall develop policies to ensure gender balance in coverage and gender equality in the workplace.

This Gender Code of Ethics should be read in line with any General Code of Ethics, whether developed by media houses, media associations or regulators.

We are pleased to announce the launching of our book of proceedings for the UNESCO/UOM conference on the media in Mauritius which was held in September 2010 at the University of Mauritius.

The book is entitled ‘Enhancing Democratic Systems: The Media in Mauritius. A Dialogue Session’. It is a collection of papers presented by the panelists which come from the media industry, regulatory agencies, political parties, civil society and academia.

The ceremony will take place on Tuesday 23rd August in ELT1 at the Engineering Tower of the University. It is open to journalists and to anyone interested in media issues such as freedom of the press, media regulation and policies, training and professionalism and new trends in the media.