Yesterday, we went to preview Michael Moore’s Sicko at the Star Cinema (thanks Joanna!). Both Avinash and myself agree that Moore’s last documentary is way much better than Farenheit 9/11 with which we had not been impressed at all. In fact, I had been totally disappointed with the amateurish cinematography of Farenheit 9/11 and thought it did not deserve the Palme d’Or at all. But, I guess at the time, they wanted to reward Moore’s daring in terms of political content rather than his filmmaking skills… 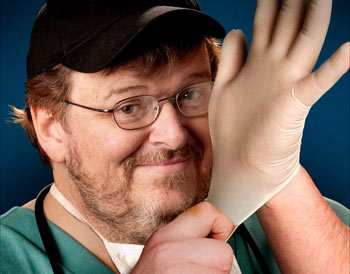 Moore’s mastery of cinematography and story-telling have much improved since then. In Sicko, he does not use any of the facile tricks he used in Farenheit and he succeeds in providing a compelling narrative that casts hundreds of protagonists: the sad clients of health insurance companies in the USA. He paints a very dark picture of the American health care system whose sole objective seems to be money at the expense of their clients. Moore shows a vast mafia-like organisation that lobbies the American Congress and even buys top politicians including his ‘dear’ friend George Bush so that laws that allow them to literally rob their clients get voted. And he visits several countries (Canada, UK, France and even Cuba) to show how the US system is perverse in comparison.

That film made us not want to live in the US, at all. Even made us thankful that we live in Mauritius where there is a quite decent free public health care. And here I’m specially thinking of my mother who had successful major heart surgery for free a few years ago…

I was interviewed by Pauline Etienne in L’express-Samedi following the arrest of three journalists (two from Radio Plus and the chief ed of Week-End).

You can read the interview on my blog here or on the site of L’express here. 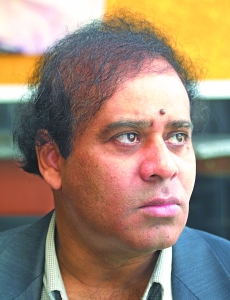 French futurologist and scientist Joël de Rosnay gave a conference last week at UOM on ‘Nouvelles Technologies, Innovations et Résistances au Changement’. He drew a well organised map and catalogue of the crucial areas of innovation and listed the many stumbling blocks that need to be overcome in order to make the most of these new technologies with special reference to Mauritius (with which he has some family ties BTW).

He identified the main areas as being those of infotechnologies (basically Internet 2.0, what he calls ‘technologies de la relation’), biotechnologies (research in genetics), nanotechnologies and ecotechnologies (solar energies). I was particularly interested in listening to his talk about new information technologies as I have read one of his books ‘La Révolte du pronetariat’ which I bought last year and also use in my class for ‘New Forms of Media’. Joël de Rosnay’s enthusiasm about the Internet revolution, what he calls the ‘media of the masses’ (in opposition to ‘mass media’) is unabated and he even came up with a funny equation when it comes to the new business model i.c.w. the technologies of relation which runs as follows:

Meaning (from what I have understood) that businesses need to attract people (by providing information-rich services for free) to create flux and those people will themselves attract other people through recommendations thus creating buzz and the business will be there.

His intense presentation cited, inter alia, the Long Tail, the idea of collective intelligence, new management styles (systemic as opposed to hierarchical). More interestingly, he also criticised the way the Cyber island initiative has turned out (in his words more a technopark where big companies pay big money to rent a locale), his initial vision being more that of a technological pole with incubators, public exhibition and meeting places to learn about technological developments. Yet, he still seems optimistic as he mapped out some ideas about the use of technology for tourism purposes (e.g. info on mobiles for guided tours, WiMax everywhere).

His presentation was so packed that it is not possible to summarise all the ideas he evoked, which were all enthusiastically received by a small audience composed of well-known entrepreneurs, academics and a few students. One can only wonder how much of his advice will have been understood and implemented… But, it’s refreshing to hear people who are on the same wavelength from time to time. Lifts your spirits up temporarily until you hear about the Facebook faux-pas of the ICTA, that is!