You are here: Home / General / My final submission to the ICTA on its proposed amendments to the ICT Act 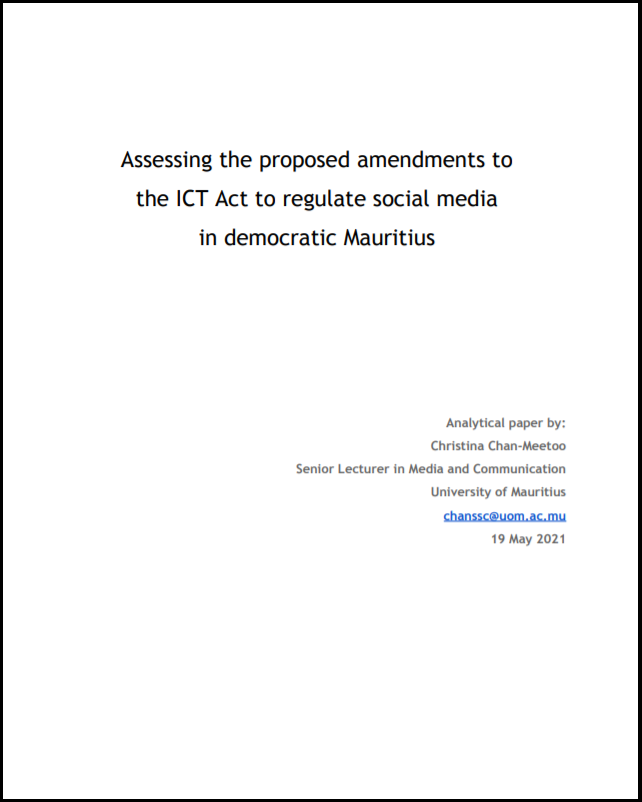 Thus, it can be deduced that platforms are not monolithic organisations and they are prone to debates both on the internal and external fronts. All parties involved still fray with the delicate issue of regulation and remain open to reviews and possible disruption of their moderation policies and mechanisms.

These mechanisms remain unsatisfactory and will probably never ever be satisfactory due to the complexity involved whereby the very same platforms can be used:

Regulating social media is not an easy task and a simple one-size-fits-all solution will simply not work without creating bigger prejudices.

14.2 Do you think that the damage caused by the excesses and abuses of social networks to social cohesion warrants a different approach from the self-regulatory regime presently being enforced by social media administrators themselves?

There is not enough data which has been made available about the damage caused by the excesses and abuses of social networks to social cohesion in Mauritius to be able to formulate an informed reply to this question. The data remains impressionistic rather than scientific. For instance, how many such cases have there been over the last years and months that have not been detected and tackled through the current investigation and legal system? What have been the trends in the number of such cases? What is the exact breakdown? What have been the actions taken by authorities? In what way have they been insufficient? To date, we have no knowledge of massive excesses that have created havoc in the social tissue of our country. There have been no major riots nor major ethnic conflicts which have been reported by the Mauritian police over the past few days that we know of.

14.3 What are your views on the overall proposed operational framework in terms of the
• National Digital Ethics Committee (NDEC)
• Enforcement Division
which is intended to bring more clarity to section 18 (m) of the ICT Act, where the ICTA is mandated to take steps to regulate or curtail the harmful and illegal content on the Internet and other information and communication services.

Please refer to comments made in the paper submitted above.

14.4 What are your views on the proposed legal amendments to the ICT Act to give legal sanctity and enforcement power to the NDEC?

This is a risky proposal as the composition of such a committee will inevitably be reviewed each time a new political party or coalition gains majority in the National Assembly to constitute government. Such powers should rest only within the justice system to ensure impartiality and independence from political power games.

There are no indications whatsoever about the following:

14.6 What are your suggestions on the safeguard measures to be placed for the NDEC?
No specific safeguard measures for the NDEC have been proposed in the consultation paper. The paper merely stipulates that:
“Before start of operations, the NDEC will also be tasked to come up with sufficient and effective safeguards to be published in order to ensure complete operational transparency and avoidance of any abusive use and misuse of this operational framework.”
First and foremost, the nature of the committee itself is problematic and one cannot expect the committee to define its own safeguards, which would be the equivalent of a watchdog being asked to watch over itself.

14.7 What are your views on the use of the technical toolset, especially with respect to its privacy and confidentiality implications when enforcing the mandatory need to decrypt social media traffic?
As stated by major browsers namely Google and Mozilla in their joint submission, the proposed technical toolset is very dangerous as it would undermine the privacy of Mauritian citizens and put them at risk of attacks by third parties if it does work. Browser makers may decide to block the system. The proxy server may be clogged down by the volume of traffic to be handled and may even be targeted by cyber attacks. As a result, access to the internet may be slowed down or even paralysed for all in Mauritius. This would not only impact citizens but also foreigners communicating and transacting with people based in Mauritius as well as local and international corporate entities.

This toolset can set us back completely as an aspiring tech hub. We may lose business and partnership opportunities, incoming FDI, inbound tourists, and existing foreign companies may prefer to move their branches or headquarters to other countries.

If this toolset is implemented, Mauritius will also undoubtedly be downgraded in international indices such as Freedom House, Reporters Without Borders, the ITU ICT Development Index, the Global Innovation Index or even the Ease of Doing Business index, inter alia. The repercussions for the economy may be far-reaching. Many international organisations have already expressed their concern and opposed the proposed amendments to the ICT Act.

14.8 Can you propose an alternative technical toolset of a less intrusive nature which will enable the proposed operational framework to operate in an expeditious, autonomous and independent manner from the need to request technical data from social media administrators?

No technical toolset can be proposed at the local level. Solutions should preferably be sought in consultation with the social media platforms and the legal and judiciary should be better equipped to deal with complaints related to social media.

In the first case, diplomatic negotiations should be leveraged with regional organisations such as the African Union, SADC and COMESA or international partnerships such as with fellow Commonwealth and Francophone allies and SIDS (Small Island Developing States).

When reinforcing our legal capacity to tackle infringements to domestic laws on social media, the investigative teams within the police force also need to be provided with regular training as technological products and services evolve quickly.

More importantly, if abuse and misuse of social media in breach of domestic laws are to be tackled in a sustainable manner, it is very important to invest in nation-wide as well as targeted campaigns for:

The investigative teams within police departments concerned should also be reinforced through capacity building.

Summary of key points in the body of my Analytical Paper

Potential alternatives to the proposed amendments