There have been a few developments lately in the local mediascape related to the web (at last!) that are worthy of attention. Starting with the Défi Media Group which has launched its website for the first time at the following address: http://www.defimedia.info

<img
This was long overdue as oddly enough, none of the print media titles it owns (Le Défi Plus, L’Hebdo, News on Sunday, etc.) had a website up to now. However, I really appreciate that the group has decided to frogleap directly into the web 2.0 world as its website does not merely display articles which have appeared in the print version. It is a platform that allows for rating of articles, comments from readers, social bookmarking as well as user-generated content in a blog section, RSS and even Radio Plus podcasts (which I haven’t yet tested though). So one can say that the Défi Media Group is the first major local media player to exploit Internet 2.0!

Another media player which has also decided to spend some effort on its website is Radio One at http://www.r1.mu

Though the website is richer in information compared with the previous one, I personally think it is still unsatisfactory. It still looks very much like a first generation website with no user comments, no RSS, no user-generated content, etc. And I can’t seem to be able to listen to the podcasts (Microsoft plug-ins?). And the readability is not fantastic as the design is not very neat and clear (compared with that of the Défi website for instance).

Ironically, whereas Le Défi does not seem to have widely publicised its own initiative (which would deserve much more public attention), Radio One has been actively promoting its website through print and radio ads.

Incidentally, I want to put a special mention for an overseas initiative by Anne Robert, a Mauritian expat in Canada who was head of the Radio One station for some time. Her website Global Mauritian provides an interesting platform for incisive opinion articles with reader comments enabled.

Note about my blog:
Since I felt a bit bored by the look of my blog lately, I’ve decided to change its theme as you may have noticed. Not too happy about this one either, but well, we’ll see when I have more time to tinker with it… 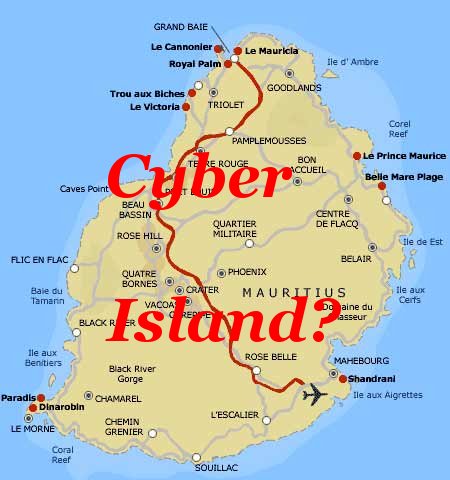 In my last post, I invited my readers to fill in a survey about ICT, Society and Poverty in Mauritius for a paper I had to present at a conference on Poverty and Development which took place on the 1st and 2nd October at Bell Village. I am here posting the slides I used for my presentation as well as some results of the online survey which attracted some 40 respondents (thanks to all). Though the results cannot be deemed to be statistically representative, they are nonetheless interesting as they provide some preliminary insights into the preceptions vis-à-vis what I call ‘The Cyber Island project’.

– Most (84%) felt ICT can help Mauritius achieve social progress with some specifically referring to the potential of such technologies for reducing economic disparities and alleviating poverty by generating jobs and wealth, and others evoking the facilitation of communication and also the easier connection with knowledge centres and other nations.

– 59% firmly believed such technologies can effectively help alleviate poverty (by contributing to education which helps people out of poverty, by creating employment, by increasing productivity and generating wealth which may be subject to taxes to be used for poverty reduction or even used by businesses for CSR programmes targeting poverty.

– Above 60% (67%) of respondents expressed moderate to serious doubts about the ‘cyber island’ project. Most felt that the local conditions for ICT deployment and use are inadequate and insufficient to bring social progress in Mauritius.

– Regarding progress achieved towards realising the project, 54% felt not much has been achieved so far. While some felt that the cyber towers are a step forward, that many youngsters are working in the ICT sector and that computers have entered most spheres of our life, others felt that this is not enough. The latter complained that many of our public services are not properly computerised, that the standards of ICT education are much lower than those of developed countries and even felt that employment in the sector is insignificant.

In essence, it seems that current Internet users agree that ICT are an important feature of modern societies and, as such, the use thereof should be promoted in order to impact positively on social inclusion and development. Yet, they also feel that the grand ‘cyber island’ rhetoric is overstretched as there is a gap between the discourse and the practice.

In other words, that Dissemination is too slow.