You are here: Home / New Media / The proposed amendments to the ICT Act to regulate social media in democratic Mauritius entail the risk of creating a surveillance state 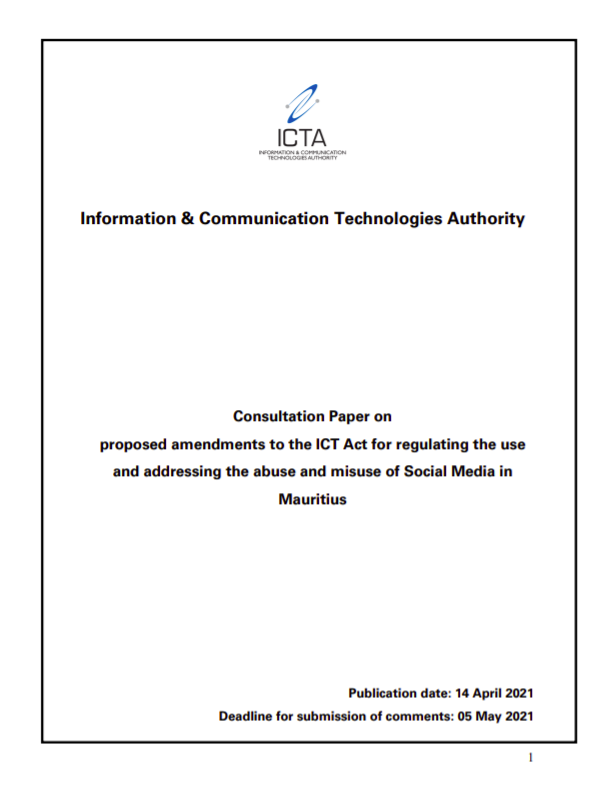 A first comment is that a list of concrete examples is needed here to gauge the extent of the problem at the national level. The list should include detailed information about the “very far reaching damage” created.  The consultation paper does include a table listing the number of incidents reported to the Mauritian Cybercrime Online Reporting System (MAUCORS).

We would however need more details on the following (inter alia):

What are those proposed amendments to the ICT Act?

ICTA is proposing the creation of:

investigate on illegal and harmful content on its own or through interaction with other stakeholders already involved in national security, crime investigation, detection and prevention or through complaints received;

What does the Constitution say?

As a reminder, Section 12 of the Constitution of Mauritius states that:

12. Protection of freedom of expression

(1) Except with his own consent, no person shall be hindered in the enjoyment of his freedom of expression, that is to say, freedom to hold opinions and to receive and impart ideas and information without interference, and freedom from interference with his correspondence.

(2) Nothing contained in or done under the authority of any law shall be held to be inconsistent with or in contravention of this section to the extent that the law in question makes provision— (a) in the interests of defence, public safety, public order, public morality or public health;

(b) for the purpose of protecting the reputations, rights and freedoms of other persons or the private lives of persons concerned in legal proceedings, preventing the disclosure of information received in confidence, maintaining the authority and independence of the Courts, or regulating the technical administration or the technical
operation of telephony, telegraphy, posts, wireless broadcasting, television, public exhibitions or public entertainments; or

(c) for the imposition of restrictions upon public officers, except so far as that provision or, as the case may be, the thing done under its authority is shown not to be reasonably justifiable in a democratic society

This section thus states that there can be no interference in our communications except with our consent and except for specific provisions involving public defence, safety, order, morality and health, reputation, privacy, courts authority, technical administration of telecoms and civil service restrictions. BUT, the last line puts everything in perspective as the provisions should be “justifiably reasonable in a democratic society” .

Unfortunately, the proposed amendments to the ICT Act do not seem “justifiably reasonable in a democratic society“.

The proposal is tantamount to blanket surveillance on the citizens of Mauritius without judicial oversight. No warrant would be needed to spy on specific individuals. ALL citizens’ communication would be interfered with in a blanket manner. The proportionality test is here crucial to determine whether such a surveillance system is really warranted in a democratic society like ours. Does this pass the balance of risks/benefits? Fundamentally, this proposal seems to contradict the philosophy of the Data Protection Act which aims to protect citizens’ private data and which was adopted in 2017 (and modelled on the EU GDPR).

What are other democratic states doing or trying to do?

In fact, we do not know of any other democratic state which is using such a system. This would be a first in the world, in the negative sense of the word. As a result, there is a high probability that Mauritius will tumble down in world freedom rankings.

In all the democratic states cited in the consultation paper, the responsibility for moderation and removal of illegal content is or will be vested with the social media platforms (when requested by governments).

The key take away here is that State agencies in democratic countries are not endowing themselves with any technical capacity to interfere, intercept and remove any content on social media in comparison with the Mauritian ICTA proposal.

I am not an expert in technology but I assume that the mechanism for intercepting, decrypting and re-encrypting social media traffic requires enormous technical capabilities given the enormous amounts of data (photos, videos, livestreams, etc.) generated daily. It is also very much a moving target because nothing can prevent any social media network from changing some implementation details which might make the system ineffective. Anyway, just by using a Virtual Private Network (VPN), anyone can bypass the system.

Other key questions posed by the proposed amendments

What are potential alternatives to the proposed amendments?

It is a positive sign that this is at the stage of a public consultation, thus requiring inputs from Mauritian citizens as individuals or groups, hopefully shaping the outcome of the final decision to amend legislation or not. In the same spirit, the next phase of the process should be transparent, that is, it is expected that there be a public report about inputs received and how these inputs are tackled by the ICTA and any other authority involved in the process.

The present proposed amendments do not seem reasonable in terms of the proportionality of the measures with respect to the problem to be tackled and puts Mauritius at risk of becoming a surveillance state with potential abuse and misuse of the technical toolset against its very own citizens, rather than to protect them.