You are here: Home / Mauritius / Radio One show on political communication 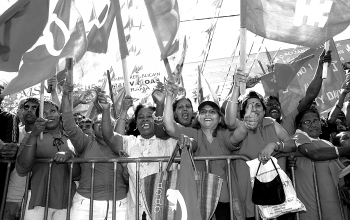 I was at Radio One this morning and was Finlay Salesse’s guest on a show about the political communication of local parties, especially in the context of Labour Day meetings.

We talked about the techniques and strategies used by our politicians to communicate with their audiences, their posters, their communication advisers, their websites, their willingness (or lack thereof) to participate in live debates on private radios, etc. and compared the Mauritian style of political communication with that of more advanced countries.

In sum, my main point was that our local politicians are completely archaic in their approach to communication. I tend to think that they need to rely on basic and superficial means that are loud, aggressive and even vulgar in order to mask the vacuum in terms of ideas and messages.

Treating us like dumb
Labour Day meetings are a complete waste of time, energy and resources. They don’t serve any constructive purpose and in fact, they do not contribute to the enlightenment of the masses, rather they treat ordinary citizens like dumb children who need to be cajoled, policed but never addressed in an intelligent manner. It is true that our voters do act in an immature way but do our decision-makers provide possibilities for acting differently? Do they treat the electorate as intelligent and capable of making their own judgements based on facts, ideas and more importantly to question the super-leaders?

Even within the parties themselves, there is not much space for democracy. There might be temporary attempts at intelligent debates but it is not part of the DNA of our local political scene too accustomed to low-level arguments and the notion that super-leaders are ‘ene tigin pli tipti ki bon dié’. Our parties are run like archaic, medieval structures and even would-be ‘ténors’ within them toe the line for fear of losing their chances of climbing the hierarchy and get that so desirable possibility to be a candidate and later grab a ministry.

Young people are fed up with this situation and rightly so. It’s not the crowds of people in rallies/meetings that reflect what the masses think. Just like polls are not fool-proof. The grassroots are bored and tired. The only thing they can actually do is choose parties (not even candidates — as goes the local saying, ‘prend ene pié banane, peine li couleur parti ki pé gagner, li pou éli’) which are the least worst according to their personal judgement. A sad situation indeed for our democracry…