There have been many ‘developments’ in the press-govt relations these few days. The PM has heavily criticised the press and used quotes with allusion to prostitutes in his rantings against journalists.

This has of course spurred the profession to write even more articles about the threats that are hanging upon the heads of reporters, to organise debates on radio (of course nothing from MBC). The latest show I heard was yesterday on Radio One with Jean-Claude de L’Estrac (boss of L’Express) and minister Vasant Bunwaree. Apparently TopFM had also invited minister Rama Valayden and journalists Nad Sivaramen and Henri Marimootoo but I missed it.

Whereas Rama Valayden has denied the existence of a draft of the Media Commission Bill in an interview in Le Defi Plus, Vasant Bunwaree confirmed that the government is actively working on the project on Radio One. Which is which?

It is now confirmed that some 60 journalists have met to discuss the ways and means of forming an association. According to yesterday’s issue of Le Mauricien (L’express has also published the news), they met on Wednesday and it was Nad Sivaramen and Sedley Assone who started it all.

I’m glad the idea is taking shape and more so to see that even the chief editors of the two rivals L’express and Le Mauricien attended the meeting. Gilbert Ahnee in fact devoted his editorial to that meeting, expressing his appreciation of the initiative (as well as his qualms about how to go about it and the obstacles they may meet). He also mentioned the creation of a mailing list/forum and a blog.

Soho, let’s wait and see whether any common ground can be found. Good luck.

It’s been some time since I last posted on this blog. There are multiple reasons for this: I had to finish a consultancy report, the kids and us were on holiday for a week, and I guess I had sort of disconnected / plugged out…

I however want to report on a radio show I was invited to on R1 on Thursday 27th July. The show is called ‘Controverses’ and was hosted by Francoise Marechal-Charlotte. The programme was devoted to the local media, more specifically to the Media Trust. The other guests were journalists Henri Marimootoo and Sedley Assone.

This lack of decision by the PM together with the announced proposal of a Media Commission Bill is prompting journalists to say that the govt wants to punish the press and drastically restrict its freedom.

As an external observer, I analysed this as a strategy of govt to frighten the press. As I pointed out in an earlier post, this seems to be working to some extent as some journalists are sometimes unduly overcautious in reporting even official speeches and parliamentary questions.

I don’t know what will be the content of the Media Commission Bill (if there is one) but definitely, we will have to be careful that it does not stifle the press (though some regulating would be desirable, specially to protect the interests of ordinary citizens).

Self-regulation not control
However I truly think that it is high time for the press to show its goodwill (and thereby avoid the ‘necessity’ of imposed control from above) by creating its own association or institution to discuss and establish codes of conduct, provide mechanisms for handling complaints and ensure redress and also incidentally raise funds for training programmes. Self-regulation is always better than imposed laws.

I also pointed out that the Media Trust is currently receiving only some 2 million rupees annually from govt, basically to fund seminars and training of journalists. Surely, if the Media Trust were really to die, that would not be the end of journalism in Mauritius.

The need for common ground
The problem is that journalists of the local press itself have not been able to communicate amongst themselves (ironic, isn’t it?). Though diversity of approaches and beliefs is certainly desirable to provide a large array of choices on the market (and thus ensure multiple voices are heard), some common ground has got to be found to ensure freedom of speech that is also respectful of all.

I heard recently that some journalists have met to discuss the creation of an association. Could it be that my suggestions have been heard? I hope the initiative is a serious and solid one…

One of the major headlines in the local media these days concerns the ‘Bookie affair’. To recap, some 7 CD-ROMs were seized at bookmaker Joomun’s place. These are being progressively ‘decoded’ and apparently, important public figures’ names appear on these lists of illegal bets (illegal as they are not declared to the Income Tax and they are done ‘a credit’).

Yesterday (Tuesday 11th July), at National Assembly, the Opposition Leader, Nando Bodha, asked the acting PM, Vasant Bunwaree whether the name of two ministers of the present govt were on these lists and he mentioned the names of the ministers. Of course, Bunwaree denied the info and there was an uproar in the majority. That’s normal…

But what’s not that normal (any lawyers or people from a legal background who can help out?) is that the a major part of the media are deliberately avoiding mentioning the names of the ministers. Most probably because the PM, Navin Ramgoolam, made a loud declaration condemning the Opposition Leader’s stance and warning people who might be tempted to make similar allegations. Yet, during the week-end, the same PM had threatened people who make vague allegations without having the courage to say the names. That’s normal again for him…

And Radio Plus and Radio One also adopted the same strategy of not citing the names. However, it was easy to figure out that one of the ministers is Asraf Dulull as he gave a press conference to deny Bodha’s accusations and extracts of the conference were aired by the radio stations.

Could it be that our journalists are afraid of even quoting what was publicly uttered by a member of Parliament at National Assembly (the proceedings of which are normally accessible to the public via its website on the govt portal, though updating is delayed by a few weeks)?

Unsurprisingly, Le Matinal did not even bother to write on the affair…

Radio Plus hosted the former PM Paul Berenger and the current Finance Minister Rama Sithanen this Saturday for a debate on the Budget speech.

This turned out, to my surprise, to be a ‘civil’ debate as none of the guests indulged in the usual futile verbal feuds we had been accustomed to. Opposing views were put forward in a sensible manner with seemingly rational arguments on each side. Of course, the divergence of views was very much present but there was, more importantly, respect for the adversary and thus respect for the audience.

Could it be that our politicians can behave in a mature way and lead the way to the formation of a mature people and democracy after all? 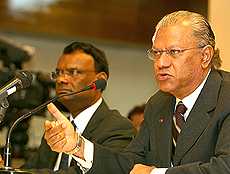 The Mauritian population was given the opportunity to watch the Prime Minister’s Press Conference on television on Saturday… or should I say that they were forced to… All three local television channels of the MBC were broadcasting the conference at exactly the same time after the 7.30 p.m. news bulletin!
For those who do not have access to private channels via pay TV or satellite subscriptions, there was indeed no other choice (except that of switching off their TV set of course!)

It could be argued that this was a very important ‘moment’ and that every Mauritian citizen had the duty to listen to the PM as he gave strong indications regarding drastic decisions for our economy. And, indeed personally, I think it was important that we listen to him and his Finance Minister on the eve of budget presentation (scheduled for this Friday). Yet, simultaneous airing on the only three local channels available, that may have been a bit too much…

But to come back to the press conference, the PM did a great PR job. Of course, his Finance Minister Rama Sithanen had already tested the ground with his proposals for salary compensations which had also been aired on TV. Sithanen was great at explaining clearly the reasons why. He was also very convincing on the necessity of being more disciplined, more efficient and more productive…

The PM thus took advantage of this positive reception by the media and the population at large to announce some ‘courageous’ decisions, like closing down the DWC. But he also performed some of the age-old political antics so cherished by our local politicians, i.e. the ‘put-the-blame-on-him’ song. Mind you, the other parties did it too when they were in power…

As for the journalists, they were quite ‘soft’ and ‘nice’ to the PM. They still lack that sharpness that would allow them to put the right questions to the decision-makers, questions that would really open up worthwhile debates.

For instance, no-one dared point out to the apparent contradiction between the austerity being advocated and the fact that old age pensions had been fully restored to all + bus transport made free for all students irrespective of social class and revenue….

I’d say, this means that our politicians have progressed a lot in terms of communication strategies and their implementation but our media people still have to learn to unwind those strategies in order to get to the bottom of things.